Vigilantes Came to Kenosha to  “Protect the Community” from Black Lives Matter Protesters. They Left Two Men Dead and One Seriously Wounded

The trial of Kyle Rittenhouse has finished its first week in Kenosha, Wisconsin.

This trial is a big deal. Rittenhouse admits to shooting three men on Tuesday, August 25, 2020—killing two—during protests against the police shooting of a Black man, Jacob Blake. Rittenhouse was 17 years old at the time and had hooked up with a crew of organized right-wing vigilantes who claimed to have traveled to Kenosha to “protect property” and maintain order.

The reality of what this meant was revealed by one of them, Jason Wackowski, in court during the Rittenhouse trial. After noting that in addition to his AR-15, he brought a knife, CS cannisters and a handgun to the protest, Wackowski explained how he was “trained” to maintain order: “shout, shove, show, shoot … You shout, you shove, you show your firearm and you shoot.” 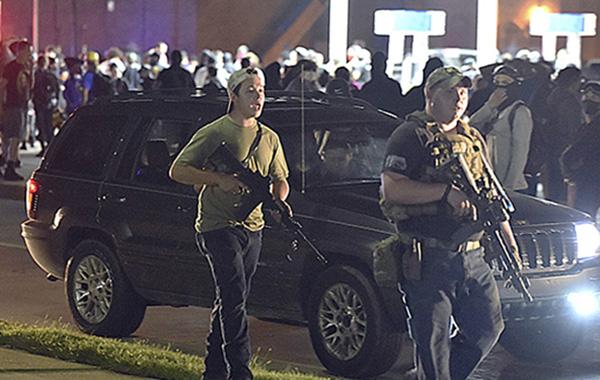 In other words, they were prepared to kill anyone who didn’t do what they told them to do. And this was echoed in a point that Rittenhouse himself made in a video from the scene: he said his crew was “full on” ready to defend the property and noted that “we don’t have non-lethal” weapons.

At his trial, Rittenhouse is arguing that he shot the three men because his own life was in danger from them. Recall: Rittenhouse was armed with an AR-15 semi-automatic rifle. One of the men he killed was completely unarmed, and the other tried to wield a skateboard to disarm Rittenhouse. Rittenhouse ended up with a few scratches and a small cut. Two of his victims are dead. No evidence has been presented so far that prior to the first shooting, anyone laid a finger on Rittenhouse, much less did him serious harm.

Clear as this may seem, the trial is another story. For example, Judge Bruce Schroeder made a pretrial ruling that the people Rittenhouse killed could not be referred to as “victims,” but could be referred to as “arsonists” or “looters” if “the evidence shows” that they were.

Schroeder accomplished jury selection in one day, resulting in 20 jurors (12 jurors, 8 alternates—19 of the 20 are white). Jurors who were seated Monday included one who later had to be dismissed for telling a sick racist joke to a bailiff about the police shooting of Jacob Blake. Other jurors were seated in spite of acknowledging irrational fear that protesters were going to invade and loot the suburbs—a fear that could easily make one sympathetic to armed vigilante “protectors.” In contrast, a woman who said her bi-racial granddaughter had participated in the protests, and another who asked “Why didn’t he [Rittenhouse] stay in his own city?” were promptly dismissed.

Protests broke out last year in Kenosha on Sunday, August 23, after cops shot Jacob Blake Jr. seven times in the back, in front of his small children. A video of the shooting quickly went viral, and thousands in this mainly white city of about 100,000 erupted in outrage.

Black and white people took to the streets that day and again on Monday. Met by police firing rubber bullets and tear gas, some people fought back with rocks and other projectiles. According to news reports, there was considerable property damage, with windows broken and stores and cars burned on a business strip. A couple of government buildings were damaged by fire. 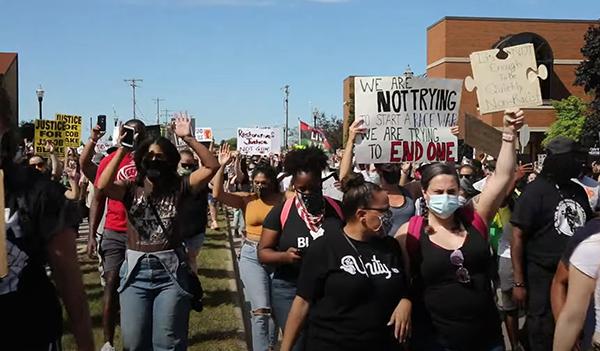 But there were no deaths those first two days/nights.

Tuesday night, August 25, was different. The authorities had been amping up their repression—bringing in the National Guard (1,000 deployed by the weekend) to reinforce the cops and sheriffs, deploying military armored vehicles, and imposing an early curfew after which protesters were violently driven off the street.

This happened in the context of an ongoing national turmoil in which police and fascist vigilantes were increasingly squaring off against protesters. Three months previously (May 25), Minneapolis cops had murdered George Floyd—a nine-minute execution caught on video that unleashed generations of pent-up anger, especially among Black people, and also cracked through the illusions and complacency of large numbers of white people, millions of whom joined protests in thousands of cities, towns and rural areas over the next few months.

This Beautiful Rising was an intolerable nightmare to the U.S. rulers as a whole—and particularly to the fascist section of the ruling class grouped around then-president Donald Trump. The rulers launched major efforts to derail, coopt, discredit or outright crush this movement, using everything from the “official” violence of the police, sheriffs, National Guard and even federal forces,1 as well as unleashing heavily armed militia, white supremacist and other fascist groups who were already (even before this uprising) playing a growing role.2

As protests continued and spread, fascists became more of a presence. In rural areas, white supremacists spread wild rumors that anti-fascist protesters were coming to loot the homes of white people. In the small Ohio town of Bethel, hundreds of fascists armed with rifles and baseball bats showed up at a small Black Lives Matter protest in June. In cities, fascists drove their cars or trucks into crowds of demonstrators. (See here, here, and here, for example.)

So this is all backdrop to the Kenosha protests. By the third day of the protests, a former city councilman was organizing on Facebook for “patriots among us willing to take up arms” and be part of the “Kenosha Guard.” Meanwhile in other nearby towns and cities existing militia forces were organizing. Among these was Army veteran Ryan Balch, an adherent of the “boogaloo movement” (a/k/a “boogaloo bois”). This is a white supremacist network that aims to incite a “civil war”—by which they mean a genocidal race war aimed at Black people. According to the Chicago Sun-Times, Balch says that there is a “general consensus” in the boogaloo movement that civil war is “imminent.” Balch has posted racist material, including retweeting a video titled “TRUTH WILL TRIUMPH ADOLF HITLER.”

Balch also claimed that there were 32 boogaloo bois at the August 25 Kenosha protest, and that his crew hooked up with Kyle Rittenhouse and his teenaged friend Dominick Black who had (they claim) come on their own, also armed with AR-15s. Balch says that his crew of older and better-trained fascists took Rittenhouse and Black under their wing and were “protecting” and directing them. Rittenhouse was videotaped not long before the shootings affirming that.

So whatever Rittenhouse did was an extension of what the more organized fascists were doing—he was directed and emboldened by these fascists forces (as well as the police and sheriffs themselves, who allowed them to operate illegally and even gave them water and  words of encouragement). The problem in Kenosha wasn’t one Trump-addled 17-year-old, it was a concerted fascist assault on the protests.

The first week of the trial of Kyle Rittenhouse has shown that events in Kenosha continue to concentrate a great deal around the extremely fraught situation in this country. Stay tuned to this site for further coverage.

1. Federal forces were used in Washington DC against Black Lives  Matter protesters on June 1, 2020 and in Portland Oregon and other areas in late July 2020. [back]

2. August 2017 had seen the infamous Unite the Right rally in Charlottesville, Virginia, where thousands of Nazis marched with torches chanting racist and anti-Semitic slogans. One of them murdered counter protester Heather Heyer. In April and May of 2020, armed militias (with Trump’s open support) laid siege to state capitol buildings in Michigan, Virginia and Oregon, and one militia group plotted to kidnap and possibly execute Michigan’s governor, all supposedly to protest the “tyranny” of public health measures taken to combat the spread of the deadly COVID pandemic. [back]