Righteous, angry and defiant mass protests are spreading across Iran. Over 80 cities rose up on Saturday alone, as women and men with nothing but fists, sticks and a hatred for oppression faced off against brutal riot pigs and religious fanatics armed with clubs, tear gas and guns. These protests have grown, intensified and spread to all areas of the country in the face of heavy and violent repression from the armed authorities of the theocratic and oppressive Islamic Republic of Iran (IRI). Go on your phone and search “Iran uprising” and look at the pictures to get even a beginning sense of this courageous and joyous uncorking of the oppressed people of Iran.

Now ask yourself: What could cause such a ferocious and courageous uprising?

For decades, women in Iran have been forced to cover up their bodies and hair with hijabs* as if their very beings were something to be hidden, confined and controlled… as if they must be ashamed of their very human existence… all on the dictate of Islamic religious authorities.

And if they dared defy this? Then they were accosted on the streets by so-called “morality police,” beaten and/or arrested, and sometimes sent for “re-education.” Resistance has always gone on against this, but this summer saw the resistance become increasingly public, defiant, and organized. September 13, when police arrested 22-year-old Mahsa Amini for "improperly" wearing her hijab and she ended up dead three days later—and when pictures leaked out of her badly beaten body in intensive care, exposing the police lie of a “heart attack”—it was finally just too much.

Dozens of people have been confirmed killed in these clashes with the security forces and media reports say this figure is low. Yet people have reached the point where they are willing to die for justice. Those are OUR people dancing in the flames. This is OUR blood running through the streets. These are our hearts, beating with the defiance of liberation. 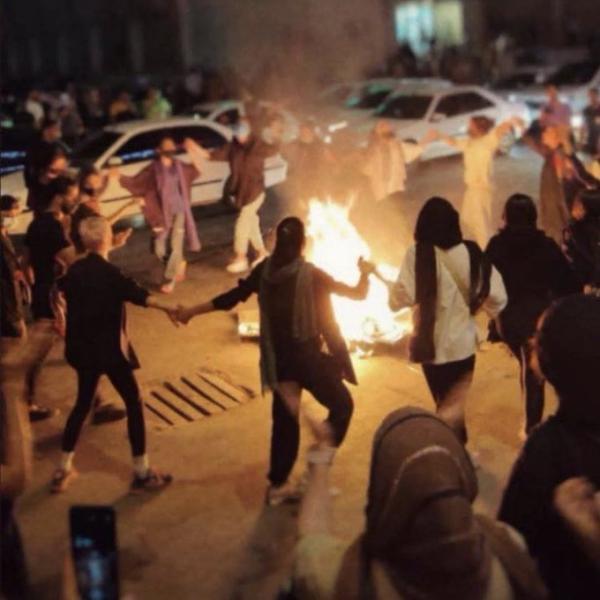 ONE: This mass uprising against the Dark Ages theocratic rule of the religious authorities is righteous and needs to be supported by everyone seeking a better world. All attempts at repression by the IRI need to be opposed.

As the Communist Party of Iran (Marxist-Leninist-Maoist) declared in their initial statement on these protests, “Compulsory hijab and the Murder of Women: Key Tools of the Fascist Islamic Republic of Iran to Strangle the Whole Society”: “The murder of women like Mahsa Amini is an existential necessity for the Islamic Republic. Overthrowing this regime is also an existential necessity for women and the liberation of all oppressed and exploited in society. The religious-fascist character of the Islamic Republic is embodied in the repression of women who do not give in to the servile relationships imposed by it.”

TWO: This mass uprising opens up real possibilities for overthrowing the theocratic regime, and it sharply raises the question to millions of what it will take to finally get free. It is extremely positive, precious and favorable for the people of Iran and for the world that at such a time there exists the Communist Party of Iran (Marxist-Leninist-Maoist), which bases itself on the new communism of Bob Avakian. The CPI (MLM) is fighting, in their words, “the struggle to eradicate every form of oppression and exploitation through communist revolution and the establishment of the New Socialist Republic of Iran.” These comrades have set out the specifics of this new society in the document Constitution for the New Socialist Republic of Iran. We encourage everyone to go to revcom.us and read and spread their statements on this recent upsurge, including “The Burial of the Compulsory Hijab, the Burial of the Integration of Religion with the State Has Begun! Let’s Finish It!” and to support their efforts to bring forth and lead what is needed.

A hallmark and defining feature of the CPI (MLM) and the new communism of Bob Avakian is a deep analysis of how the oppression of women is interwoven into the capitalist-imperialist system, and how the struggle for the liberation of women and against all forms of patriarchal oppression is a driving force for revolution. The struggle of women to be free of tradition’s chains is not something off to the side of revolution—it is a key part, a driving force, both before and after the revolution, of the world process of emancipating all of humanity and a world free of all exploitation, oppression and antagonistic social divisions.

THREE: Joe Biden, as the leading representative of U.S. imperialism and atop the system of capitalism-imperialism that enforces these relations of oppression, stated at the UN General Assembly in New York, “Today we stand with the brave citizens and the brave women of Iran who right now are demonstrating to secure their basic rights.”

This is complete and utter bullshit, but it is also ominous.

First on the bullshit: Educate yourself to the actual reality of what the U.S. has done in Iran and to the Iranian people. From 1953 down to today, the through-line that marks U.S. action toward Iran is its attempts, one way or another, to dominate the Iranian people and Iran’s resources in service of U.S. imperial interests and to constrain their imperialist rivals. This has taken many forms through the years, from carrying out violent coups to brutal puppets, from fomenting wars to “sanctions” that punished and tortured Iran’s people, and people should go to our website revcom.us to get a fuller sense of this, including in the new article “Courageous Uprising In Iran: How Did Things Get to This Point? Did the U.S. Have Anything to Do With It?” Biden’s statements are nothing but part of the decades-long U.S. attempts to weaken the regime and make Iran, and the whole Mideast, subservient to American needs and designs. And the Iranian regime’s antagonism to the U.S. is not that of a government standing up for liberation, but of a low-level gangster fighting for turf against the big Mafia don. Neither the U.S. imperialists nor the Islamic theocrats should be supported; both must be opposed. 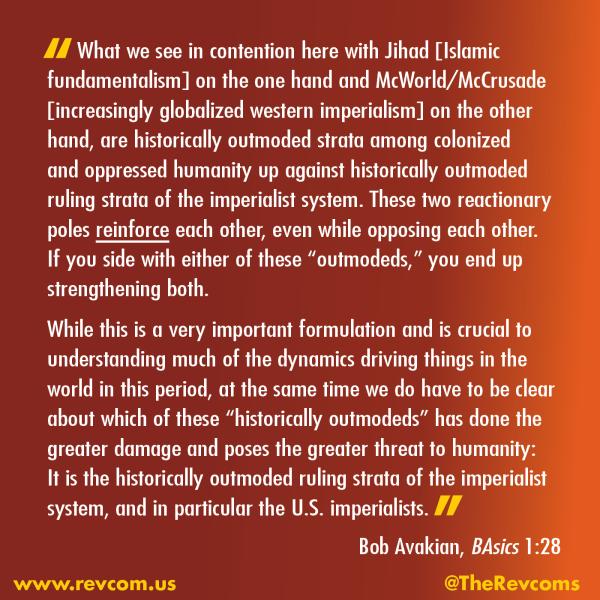 As for “supporting women,” you need look no further than Saudi Arabia, the stalwart U.S. ally in the Middle East which is just as misogynist and repressive as Iran. Indeed, look no further than the U.S. itself, where Biden and the Democrats continually attempt to conciliate with the theocratic, Christian fascist, abortion-outlawing Republican Party.

But now for the ominous part. The statement is ominous precisely because the U.S. regards Iran as a bone in its throat and will very possibly use not only economic and diplomatic pressure but other forms of intervention, including by working through and with Israel, to subvert the Iranian people’s struggle and restore outright U.S. domination. These imperialists must not be allowed to pervert this struggle to their own reactionary ends.

The key thing is this: the Iranian people have stood up. They need and deserve our support. And as a key part of this we need to get into and help spread everywhere the news and meaning of this struggle, as well as the statements and documents of the Communist Party of Iran (MLM), which fights today for the liberation of Iranian women, as part of the overall process of socialist revolution.

* The religious code that governs women’s clothing, which Iran focuses on the mandatory headscarf and “modest dressing” (covering arms and legs). [back] 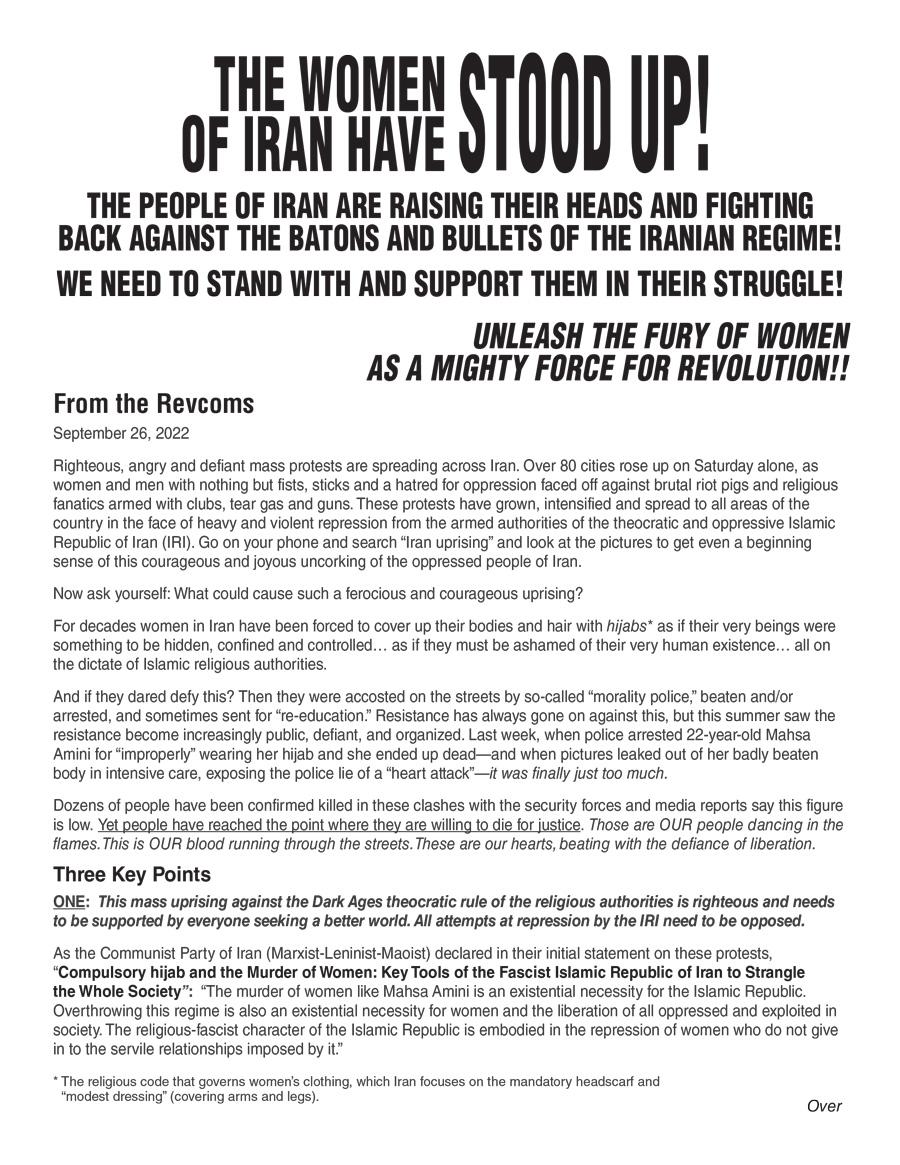