Or lift your sights, think critically, and find out about the revolutionary leader Bob Avakian

Working to Repolarize for Revolution on a SoCal Campus

From members of the National Revolution Tour

We want to share the story of some experimentation we’ve been doing that went into the events described in this article from the Cal State Long Beach newspaper: “University Police threaten Revcom speakers with arrest during demonstration.”

We’ve been wrestling with Bob Avakian’s analysis and roadmap for revolution concentrated in Something Terrible, Or Something Truly Emancipating: Profound Crisis, Deepening Divisions, The Looming Possibility Of Civil War—And The Revolution That Is Urgently Needed, A Necessary Foundation, A Basic Roadmap For This Revolution, and the need that is repeatedly emphasized to wage tireless, and at times fierce, struggle to change the thinking of masses of people to repolarize society for revolution.

The urgency of this situation—and the urgent need for repolarization, for revolution—must be clearly understood, and forcefully conveyed to masses of people. This must be done in a compelling way, without hype (and there is no need for hype to describe the critical situation and urgent stakes). While it is crucially important to unite with people in rising up against the terrible injustices and outrages constantly perpetrated by this system, and to continually bring alive the possibility of a radically different and emancipating alternative, once again it needs to be stressed: It is necessary to wage a tireless struggle to break people out of the ways of thinking, and acting, that in fact keep them chained to this system and contribute to perpetuating this system, in one form or another. (Something Terrible Or Something Truly Emancipating)

In critically looking at some previous experience, we saw the need to be doing some things different. Instead of just boldly projecting the need for this revolution, and just exposing the wrongs of this system and ways of thinking that keep people chained to it, we were seeing the need to find ways to break open more mass contention and debate over concentrations of these ways of thinking.

So, in building toward the premiere of the interviews with Bob Avakian on The RNL Show, we looked to take a different approach in going to Cal State Long Beach, a campus we’ve impacted previously. Last semester, we had drawn forward and begun working with some students who were lifting their heads toward revolution only to then immediately encounter trash-talking about Bob Avakian and the revcoms as a “cult” that no one should have anything to do with. This garbage was actively coming from a campus group, La F.U.E.R.Z.A, that the students stepping forward thought should be receptive to the message of revolution. This did harm, working to win people away from learning about the leadership for revolution and how real revolution could be made. Even some people we had a chance to talk to and struggle with individually either got taken in by this bullshit, or couldn’t stand up to it.

Revcoms take on haters who CRY #cult at SoCal October 26

We aimed this time to open up debate and contention over all this in a mass way, not just one-on-one struggle. So, as we put forward the high-stakes time we are in, the need for revolution, and the need for people to see the interviews with Bob Avakian and engage the leadership for this revolution, we also called out the “cult” line in opposition to this, including naming La F.U.E.R.Z.A. We called on people to come hear from the revcoms, and for those running bullshit to make their arguments in public. This flyer went out widely the first day, posted up around campus and put in people’s hands as we made short speeches to crowds of students in eating areas.

La F.U.E.R.Z.A’s response was not with any substance to try to back up their “cult” accusation or put forward their disagreements about what solution is needed to what problem, but instead to make a pathetic social media post encouraging people to take care of themselves and not interact with the revcoms. Go here to see our response the next day, which includes their post.

Revcoms Respond to La Fuerza charges of "cult" at SoCal

What’s important to note is that we saw this not only for the harm it does, but also as an opportunity to open up the mass debate and struggle needed over revolution vs. accommodation to this system, and specifically the leadership of BA, who is a rare and unique leader for emancipating humanity, which is sharply contended and sometimes viciously attacked. We went back with a new flyer further sharpening the contention, the terms of what was being struggled over and why it mattered to hear out this debate. We also came up with a creative, and provocative, mockery of the cowardly ignoramuses who cry “cult” in order to get away from having to think and engage. We made these “Get Out of Thought Free” cards which were distributed on campus, and an enlargement of it which was hand delivered to La F.U.E.R.Z.A. 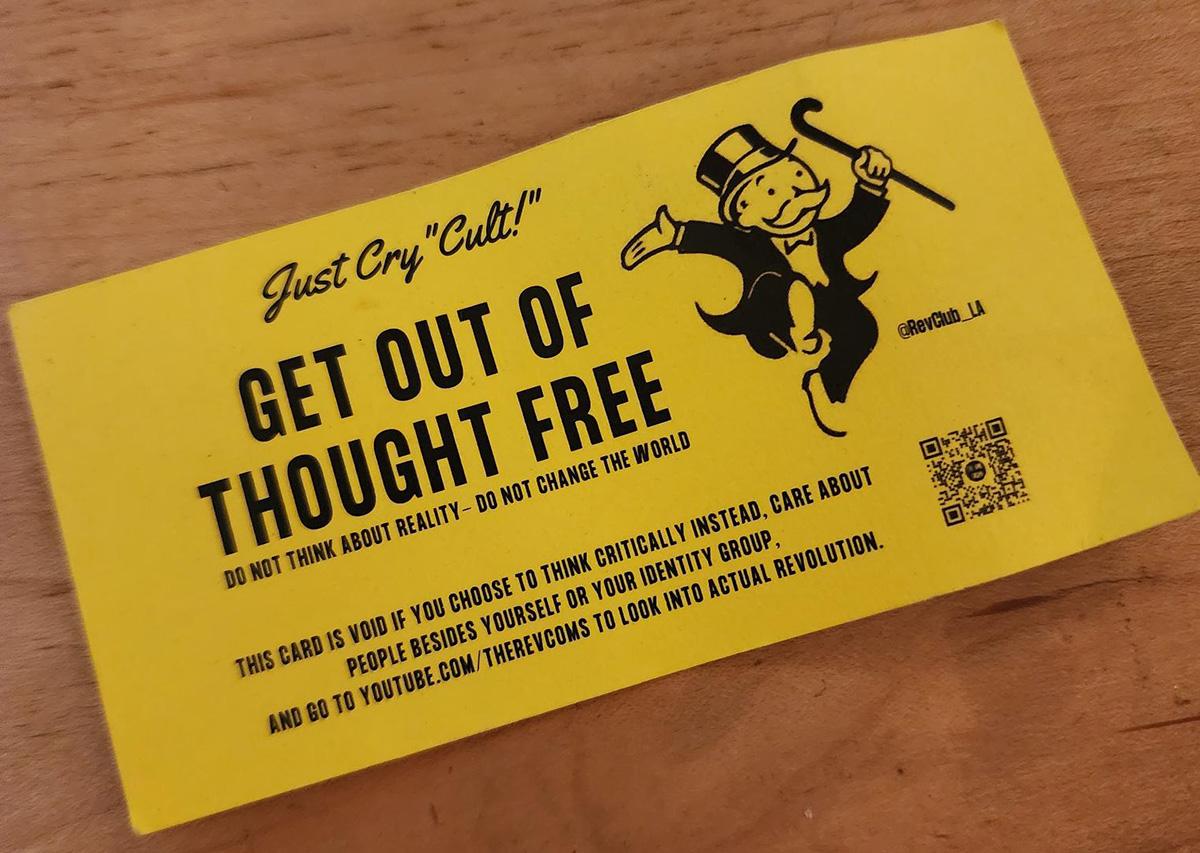 No one from La F.U.E.R.Z.A came to defend their shit, though some students associated with them circled the gathering a few times yelling “cult” from the sidelines. Someone at the campus working with campus security and the police tried to have the revcoms's speech shut down from the very beginning. But students came to hear and wanted to know what the different arguments were. Some stuck around to discuss for a while, including with big questions about how revolution is possible. We put forward some important things in the discussion, but there was a way people were still being pulled by the “cult” argument because of an unscientific approach and wrong/prejudiced understanding of the significance of rare and unique individual leaders. One very important lesson we drew from this was the need for ourselves to have much more thoroughly grappled with—to internalize and wield–the work Bob Avakian has himself done on these questions, especially the very good article “Bob Avakian Speaks to ‘Cult’: A Ridiculous , Ignorant, and Irresponsible Accusation.”

All in all, it was a really wild and wooly scene–arguments and debates, campus pigs shutting down our sound and trying to drive us out with administration backing, students watching some excerpts of the BA interview in the midst of this, etc. As we left campus, we were followed out by police and banned from campus for a week. We will be going back and there will be more to say about all of this. 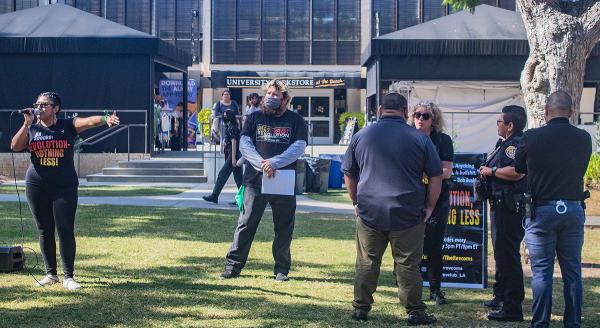 The point of this story is to share some key lessons: To repolarize for revolution, the struggle that is needed cannot be off to the side or just with one-on-ones while the actual forces, people, and trends of thought that influence people go on uncontested. We have to find creative, substantive, and bold ways to break open mass debate and struggle. And to go back and make the BA interviews themselves a pole of attraction and, yes, debate. And, we need ourselves to much more fully take up the work BA has done that is leading in how to do all this.

This was an early experiment, and there are still things to do better and different. But there is a seed of a different approach that is much more in the right direction of what BA is talking about when he repeatedly emphasizes the need for tireless struggle to break people from the ways of thinking and acting that keep them chained to, and perpetuating, this system.