Latest Posts and Past Articles

Go to "Download This Week's Posts" for quick downloads of previous weeks' posts.

Special Supplement
WARNING: The Nazification of the American University

What the US spreads around the world is not democracy, but imperialism and political structures to enforce that imperialism.

This is the second excerpt drawn from a talk given by Bob Avakian, Chairman of the Revolutionary Communist Party, to a group of Party members and supporters in 2005.

A previous excerpt -- More on "The Coming Civil War" -- appeared in Revolution #29.

Two more excerpts from this talk will be available on this site by Tuesday, January 10.

Dates announced for Drowning out Bush's State of Union

Bush Step Down — And Take Your Program With You!
Dates just announced to drown out the Bush lies:

Correction: (for print edition of English Revolution issue #28 p. 10) The headline for the excerpt from Bob Avakian incorrectly left out the name of the video/DVD REVOLUTION: Why It's Necessary, Why It's Possible, What It's All About. Distributors: Please print the correction(Avery 5160). Paste it vertically in the free space to the right of the current headline.
The online edition has the correct headline. 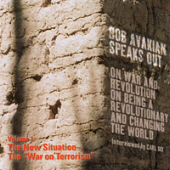 Bob Avakian Speaks Out:
On War and Revolution
On Being a Revolutionary and Changing the World
Interviewed by Carl Dix
Buy/Sample Audio of CDs online
Volume 1 and Volume 2

REVOLUTION: Why It's Necessary, Why It's Possible, What It's All About

Excerpts from a Film of a Talk by Bob Avakian, Chairman of the Revolutionary Communist Party

And let's talk about what the system does to the youth everyday, to the future, or what's supposed to be the future, of the society and the people -- people without a job, youth who have no hope of a decent job who are hanging out on the streets looking only to something like crime to maybe give them a way to have something and get some respect.
Read the full excerpt

To the Editor, New York Times:

Frank Rich errors when he writes ["It Takes a Potempkin Village" 12/11] that George Bush's "Plan for Victory" speech is "the usual unadulterated nonsense." In fact, Bush's speech contained the rather unusual admission that "by far the largest group" of those Bush has deemed "the enemy" are "ordinary Iraqis, mostly Sunni Arabs." And however exaggerated Bush's claims of progress in "Iraqi-izing" the war, an essential element is ethnic cleansing. Seymour Hersh reports that in the attack on Tal Afar, US-sponsored Iraqi forces were "killing Sunnis on behalf of the Shiites," with the "active participation of a militia unit led by a retired American Special Forces soldier." The question is not how to win an unjust, immoral war like this, it is how to oppose it.

On the newfound criticisms by some Democrats of aspects of the Iraq war
"An immoral and unjust act should be opposed because it is immoral and unjust. To criticize it only for failing to succeed is the stance of a scoundrel, and worse."
Bob Avakian, Chairman, Revolutionary Communist Party, USA

Hunger Crisis in Niger: Starvation by the Market, by Raymond Lotta

From the worldcantwait.org:
Instructional Video for Organizers: 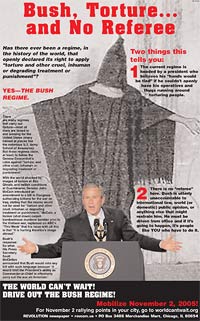